skip to main | skip to sidebar

"Friends are God's way of taking
care of us."
Unknown

Such beautiful weather for January, more like late February or even March weather.  And today is the second day of such weather.  While I rode yesterday, it did not comfort me as it usually does and it was a hard day on many levels.  It was just one of those crummy days where you can't define why you don't feel so chipper, you should feel chipper, but you just don't.  And there is no good reason you can put your finger on.  Age has brought me the understanding of how quickly feelings can change.  Or maybe not the understanding, at least of why, but the realization that no matter how down I may get eventually the sky will seem blue again and a smile will tease my face.  Still, those blah days sometimes take some getting through.

Today is different.  I will be riding with people that I have not ridden with for about a year, but I am so looking forward to it.  And they greet me as a friend with smiles and some hugs. Rich had the brilliant idea of buying carnival beads to pass to people during the ride as it is the first day of carnival.  While I am aware of carnival and Mardi Gras, I have never been and it would never have crossed my mind that it was starting.  My beads are green, purple, and gold.  At one point during the ride I wonder if the colors have meanings, but by the time I am riding close enough to Rich to ask, the thought has slipped through this steel sieve that now seems to be my mind.  The thought of giving away the beads makes me think of my first PBP when I took along little plastic parachutes, candies, and stickers to give to the children I saw along the route.  But that is another story for another day.

At the ride start, we do as cyclists do when the weather is supposed to have a large temperature range and question whether we have enough layers on or too many.  Will we be too warm?  Will we freeze?  I opt to add another layer, but shed it early in the ride, overdressing as usual.  I know my hands will be warm as I have my barr mitts taped to my handlebar from when it was a bit colder and won't undo them until winter is over.  I love the chatter that spills out at the start of a ride as hearts and minds share the things they have been storing up for a face to face meeting.  Sometimes I participate, often I participate, but sometimes I just like to listen even if I can't distinguish what is being said.  It is the music of voices, the comfort of the sounds of communication that is amiable and pleasant.  It is very rare on a ride to hear the harsh, strident tones of anger, unless it is directed toward a motorist that has unnecessarily and thoughtlessly caused safety concerns.

We are doing a road ride today as Pat does not have his mountain bike with him, and I grin when I hear Tim sold his road bike and is riding a hybrid.  He is strong enough to do this, but I later tease him about the irony of a bike store owner not having a road bike.  I would have come to the ride regardless and got through the mountain biking parts as best I could, but I know that the only struggle I will have on this ride are the hills, and are there hills.  Three lovely, long climbs are included on what turned out to be a low traffic, beautiful course.  And of course, where there are delicious climbs, something I am glad to find I can still enjoy, there are even better descents.  Tim compliments me on one descent and it makes me think of the time Mike "Sparky" Pitt told me I was a fearless descender and should have learned to ski.  I store these new nice words with the old nice words to pull out when I am doubting my talent or ability or any time I need them.  Nice words do that to us.  Sometimes I wonder why we do so much tearing down of others when nice words are so powerful, but maybe they don't affect others as they do me, at least when I feel they are sincere.

Rich will later bring it up over lunch, but I quickly remember what a treat it is riding with Keith because of his keen powers of observation.  At one point he points out a small hole in the clouds (most of the day was sunny but for some reason at that point there were clouds) that has what appears to be a rainbow of changing colors.  We stop to watch and Tim says that he thinks it is aurora borealus.  I don't know if it that or a rainbow, only that it is beautiful and that we have stopped by one of the many creeks we have ridden by and the sound of the rushing water is music to my ears.  I think how I like that about this group, how they don't mind stopping to just take a minute and look at something if they feel like it.  I like how Pat can climb the hills leaving us all in his dust, yet patiently sits and waits and protests if you tell him he climbs like a goat.  (He does and must have a wonderful weight/strength ratio).  His build reminds me of Mike "Diesel" Kamenish, another strong climber that I know.

I think of Mike again during this ride because of how he looked up so much history of the route he put together for one ride.  Rich always seems to know the history of places we are riding and since I love both history and stories, this is right up my alley.  After one of his stories, I think of how I hope I make it to the International Story Telling Festival in Tennessee again this year.  It has been awhile since I attended, but I truly enjoyed it.

We are supposed to give away our beads during the ride, but as we near the end Tim is the only one who has done so.  I stop as we ride along next to the river to give mine away, the first to a couple and the last to a woman in a purple coat who looked as if she could use a smile and a touch of kindness.  It is strange how things work, because this took my mind off the way I teared up as we rode past Key West Shrimp House where my husband and I shared so many anniversaries.  I miss him.  I will always miss him.  But mostly I am grateful that we had our time together.  Because we are beadless at the end, Rich gives us some beads to keep as a memory of the ride.  After lunch, when I return home, I hang them  in my new bike room. 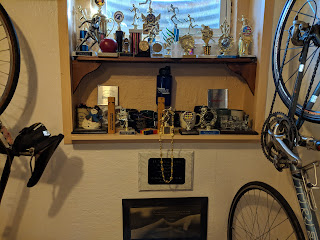 It is good to have memories, and maybe even better to make new ones. It is good to have friends.  These things are blessings.  Precious and to be held onto and appreciated.  Thanks, everyone, for a special day on the bike.